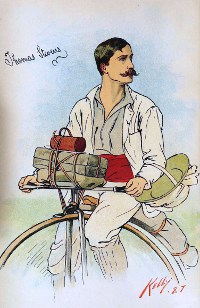 Thomas Stevens began his bicycle ride across the USA on April 22, 1884. His ride is the first recorded bicycle ride across the United States. Riding a fifty inch Columbia, Stevens crossed America riding on a variety of surfaces. If we had been in San Francisco at the time we could have heard some say his plans were, “The impracticable scheme of a visionary.”

Stevens responds, “The first essential element of success, .., is to have sufficient confidence in one’s self to brave the criticisms.”

“So eight o’clock on the morning of April 22, 1884, finds me and my fifty−inch machine on the deck of the Alameda”. He took the ferry from San Francisco to Oakland to begin his trip. His machine was a Colombia Standard in black enamel built by the Pope Manufacturing Company of Chicago. Fifty-inch refers to the diameter of the front wheel. The back wheel would be about eighteen inches in diameter. An Englishman by birth the twenty-nine year old wheelman was fair with blonde hair parted in the center. His mustache was full. He stood 5 foot 5 inches at about 140 pounds. A picture of him standing next to his wheel shows the saddle at his shoulder with the bars at his chin.

Local readers will be interested to note that he crossed into Illinois at Rock Island, riding east through Sandwich, Plano, spending a night in both Yorkville and Naperville, arriving in Chicago July 4th.  He wrote later about the good cycling on the graveled roads coming through Sandwich and Plano and some other places.

He rolled into Boston August 4th at 2:00pm. Stevens completed the first transcontinental bicycle ride. He had traveled more than 3700 miles, by wagon trail, walking railroad ties, even riding between the rails at time, fording streams, and walking fully a third of the distance.

The Boston Globe reported the following day, “His attire consisted of a blue flannel shirt, brown knickerbockers, blue stockings, canvas shoes, and a once white military helmet hat. A notebook was strapped to the head of his machine. His clothing showed unmistakable signs of hard usage. His knickerbockers have been replaced many times.”

After a layover Stevens did continue around the world completing his trip Friday, January 6th, 1887 in San Francisco. You can read about his travels in his book Around the World on a Bicycle. It is available at Project Gutenberg. 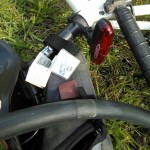 Just 6.66 miles from home on the way to meet my daughter Kate I had a flat. The quick patch worked well. Still I had another flat a few miles later. It was a tiny hole, I couldn’t hear the air leaking. I ended up switching tubes. The tire, a Specialized Transition 700c x 28 had about 4000 miles on it. It has now been replaced.

My grandsons had a chance to play in the park before we headed toward home. 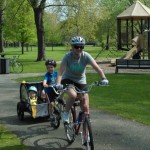 Kate gets a good workout every time she takes the boys out on this rig. She really could use some lower gears than those available on the bike she is riding. We stopped near a bicycle shop in Batavia for a picture in the geodesic dome built with bicycle wheels. 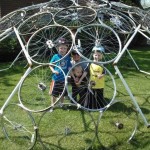 Kate and the boys

The Wind is Your Friend

Recently we have had a lot of wind in our area. I try to work out routes that let me go out into the wind and return with it behind me. It does not always work out. Some days the wind shifts against me on my return trip.

I was on a webinar listening to author and coach John Howard of John Howard Performance Sports. He said, “The Wind Is Your Friend.” Since we have to live with the conditions as they are, we might as well take advantage of them. You can ride hard into the wind then turn around and recover for a while. On my ride yesterday, the wind was up in the 30mph plus range. Gusts were reported at over 40mph. I was on the Centennial Trail and staid east of Lemont Road to have some protection provided by the woods. I just do not go as far in my training time when I have to ride into the wind. I typically have to drop into the lower gears so I can keep a reasonable cadence.

Riding into the wind, my heart rate monitor shows that I am getting a good workout. When the wind is behind me, while I go much faster, my heart rate is slower and I am not working as hard as I might.

One of the topics that comes up in planning a coast-to-coast bicycle ride, is the prevailing wind. It is west to east. I am starting in Anacortes, WA on the west coast. I am not counting on tail wind as I bike across the USA. 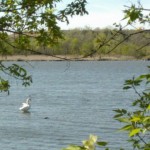 Swan Preening on the River

Last week training on Centennial Trail I saw a pair of swans preening on the river. Later in the week I encountered a whitetail deer. It was about 50 yards or less from me, standing at the edge of the trail. When it saw me, it ran to the edge of the woods, stopped and turned to watch my approach. Deer are curious animals. That same day I saw a fellow in a recumbent with a full body. He was really moving. I think all of the speed records for human powered vehicles have been set by this type of bicycle.

On my training ride this afternoon I made an unscheduled stop to change a flat tire. I had been around 1800 miles this year without a flat. I inspected the outside of the tire. Seeing no signs of a puncture, and noting that the valve stem (Presta) had not been tightened, I add some air and rode a short distance before it when down again. When I removed the tube, I pumped in some air. Not finding the leak, I carefully ran my finger along the inside of the tire. The puncture was caused by a tiny thorn. Once located from the inside, I found the entry point on the tread. I was back on the road in about 15 minutes.

It was a very pleasant day other than the persistent 26mph crosswind with gusts that approached 40mph. I was on the Centennial Trail near Lemont. The trees near the river and the woods in other areas helped a lot. These tires are nearing the end of their life. Perhaps new tires will give me more flat free mile.

Northern Ireland’s playwright Stewart Parker once wrote, “The bicycle hides nothing and threatens nothing. It is what it does, its form is its function.” – Stewart Parker, Spokesong

Have fun. Go ride your bike!

The Ride Starts in 7 weeks. Watch for updates.